This is the question with which Sr Sabine Schratz OP, member of the Historical Institute of the Order of Preachers, grappled in a recent presentation. Her talk, on 1st June 2022, was part of a series on the jubilees of a variety of religious orders, hosted by the German Embassy to the Holy See in Rome. So, is the Dominican charism relevant after 800 years? Alluding to the founding context of the Order – the preaching to the Cathars – Sr Sabine reflected on Thomas Aquinas’ ambivalent approach towards heretics: on the one hand, his uncompromising (and inexcusable) call for their persecution and, on the other hand, his surprising appeal for tolerance towards them because, among other reasons, we can learn from them. These two stances in Thomas’ thinking suggest a two-fold mission for an order which incorporated study and its importance in its constitutions: firstly, a thorough analysis of and clear stance against practices and ideologies hostile to human dignity and, secondly, engagement and dialogue with the zeitgeist. Sr Sabine further developed the question of the Order’s relevance through discussion of its “democratic” structures, innovative at the time and now an encouraging model for current reform debates. In a final section, taking today’s contexts of preaching as identified by the last General Chapter at Biên Hòa (2019), she expounded how these are embodied in the life of the Order in both historical and contemporary realties. The lively discussion in response to Sr Sabine’s talk made evident the timeliness of the Dominican approach for a world where the need for dialogue and collaboration is pressing: from the challenge of creating a new post-war order in Europe to a re-definition of the Church’s role in contemporary society – and so much more. 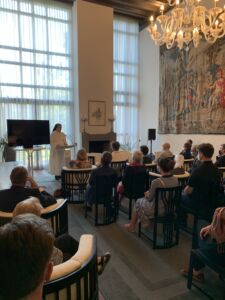 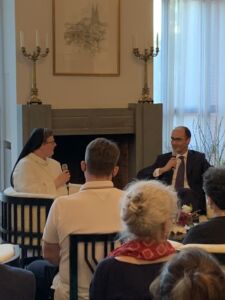