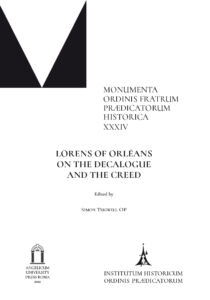 This edition of two chapters of Lorens of Orléans’ best-selling Somme le Roi in French and Occitan is intended as a tribute to the late Prof. Peter Ricketts, whose untimely death prevented the achievement of his own projected edition of the complete Occitan text, for which a commentary was to be provided by Dr Simon Tugwell OP in which particular attention would be paid to Lorens’s immediate sources such as Miroir du monde, Peraldus, Vincent of Beauvais, Stephen of Bourbon, as well as standard Parisian theologians such as Peter Comestor, and to the relationship between the French original and the Occitan and Middle English versions. The importance of this for the establishment and interpretation of the text is illustrated in the introduction to this small sample and the accompanying commentary. In addition to the usual indices there are Old French, Old Occitan, and Middle English glossaries.